The highlight of the event was the presentation of the inaugural Gerald “Jerry” A. Spohrer Memorial Award of Excellence to Rosemary Spohrer, his widow, in his memory. The award was created and named after Mr. Spohrer for his leadership, commitment, and outstanding work building defenses to protect the citizens from disaster. Prior to the levee district consolidation after Hurricane Katrina in 2005, Mr. Spohrer was the Executive Director of the West Jefferson Levee District for more than 17 years. He was a longtime SLFPA-W employee, who led the Southeast Louisiana Flood Protection Authority-West following levee district consolidations and later, served as Special Assistant to the President, a role in which he provided leadership and guidance on major planning and construction projects for the Authority. Spohrer played an integral role in the multi-billion dollar West Bank and Vicinity Hurricane Protection Project.

The Times-Picayune/NOLA.com covered the event, highlighting Mr. Spohrer’s commitment to SLFPA-W and the citizens of the West Bank.

SLFPA-W president Susan Maclay presided over the ceremony, expressing her appreciation to the SLFPA-W staff for its exemplary service and safety record. “We truly appreciate your commitment to keeping the residents of the West Bank protected,” she said. “It is because of the work that each employee contributes every day that we’ve been able to greatly increase the safety for all of the citizens of the West Bank.”

Parish President Young, Chairman Roberts, Representative Buillot and Mayor Shaddinger all praised the work of the Authority and its workforce in protecting the West Bank. “The dedication to your work does not go unnoticed,” Mayor Shaddinger said. “You continue to make the West Bank a safer place to live and work. I am proud to work with the Southeast Louisiana Flood Authority – West because I know that they are dependable and I can count on this organization during challenging times.” 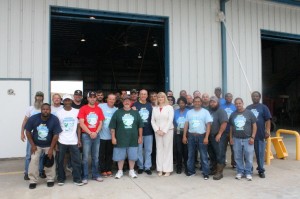 SLFPA-W president Susan Maclay and recipients of the Safety Awards gather at the Authority’s command center in Marrero for employee appreciation day. 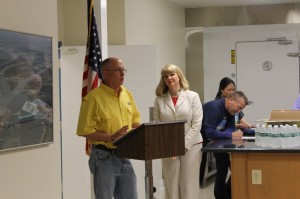 Representative Robert E. Billiot thanks SLFPA-W employees for their commitment to the Authority.